In this blog post, we want to go over the motivations and applications of the Cardinality Estimation Benchmark (CEB), which was a part of the VLDB 2021 Flow-Loss paper.

There has been a lot of interest in using ML for cardinality estimation. The motivating application is often query optimization: when searching for the best execution plan, a query optimizer needs to estimate intermediate result sizes. In the most simplified setting, a better query plan may need to process smaller sized intermediate results, thereby utilizing fewer resources, and executing faster.

Several approaches have shown that one can consistently outperform DBMS estimators, often by orders of magnitude in terms of average estimation accuracy. However, improving estimation accuracy may not necessarily improve an optimizer’s final query plan, as highlighted in the following simple example1.

In order to build large workloads to evaluate the impact of cardinality estimators, we introduce a novel programmatic templating scheme. We use it to generate over 15K challenging queries on two databases (IMDb and StackExchange). More crucially, we provide a clean API to evaluate cardinality estimations on all of a query’s subplans with respect to their impact on query plans.

Consider query 1a66 from CEB-IMDb, shown below. A cardinality estimator provides the size estimate for each of its subplans (every connected subgraph of the join graph is a potential subplan we consider). CEB contains true cardinalities for all these subplans. 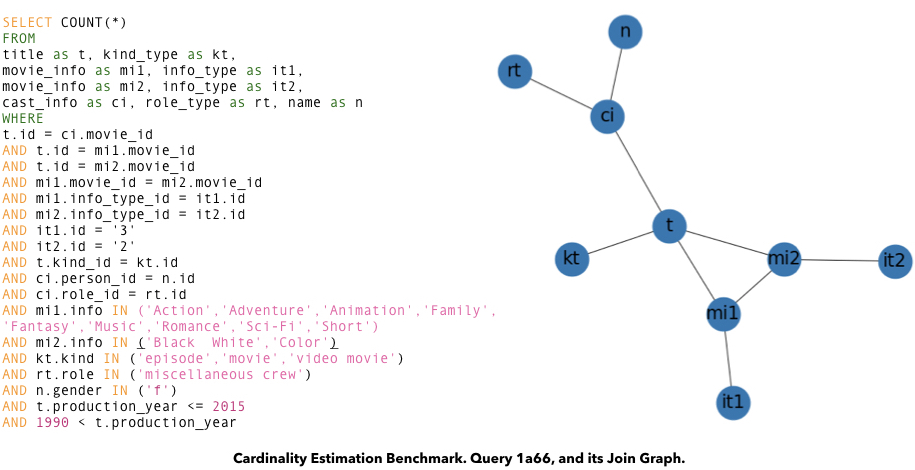 Each node is a scan or join operator. The colorbar for the nodes goes from green to red, i.e., cheap operations to expensive operations. Thus, looking for the red nodes immediately shows us why the estimates messed up: PostgreSQL underestimated cardinalities of two key nodes (highlighted in the left figure), and thus, using a nested-loop join was a bad choice — since the true cardinalities of these nodes were large, and would therefore require a lot more processing. This is a common pattern of PostgreSQL cardinality underestimates resulting in bad plans. That being said, we also see examples in CEB where PostgreSQL gets a worse plan due to overestimates, or other subtler motifs.

You can test your own cardinality estimator using our Python framework in the CEB GitHub repository. You just need to provide the estimates for all the subplans, and it should evaluate those estimates based on Q-Error, or different Plan Costs (e.g., using the PostgreSQL backend, or a simpler cost model).

We provide a simple featurization scheme for queries, and data loaders for PyTorch, which we use to train several known supervised learning models in the CEB repo. One of the key results we find is that when the query workload matches the training workload, learned models tend to do very well in terms of query plan performance, but when the workload changes somewhat, the learned models can be surprisingly brittle: 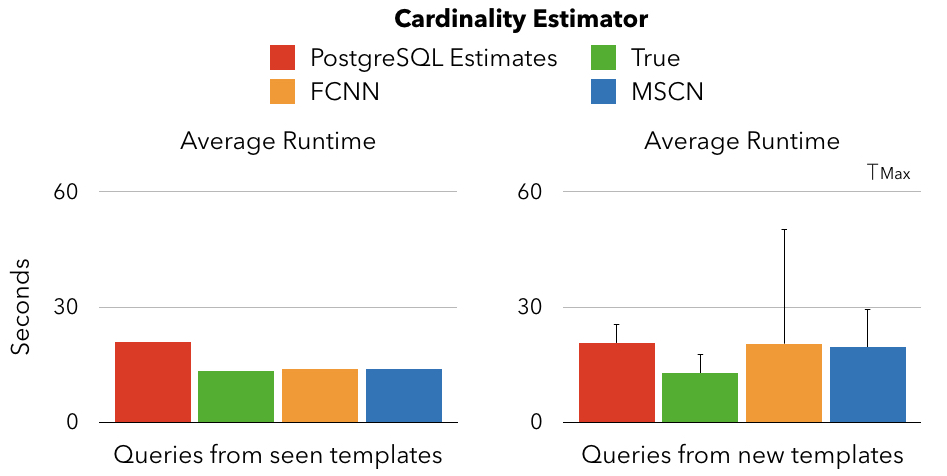 The figure on the left has the training / test set queries split equally on each template (only test set results are shown). We see even the mean of almost 6K queries shows a large gap between PostgreSQL estimates and learned models — this translates to several hours faster total runtime of the workload. The figure on the right splits training / test queries such that queries from half the templates are in the training set, and the rest are in the test set. Since we have only a few templates, the performance can be very sensitive to the particular seed used to do the split, therefore, we show the results across ten such splits (seeds = 1-10). Observe that there are some extreme splits where the learned model performance can degrade dramatically.

These trends are also reflected when we use Postgres Plan Cost as the evaluation metric: 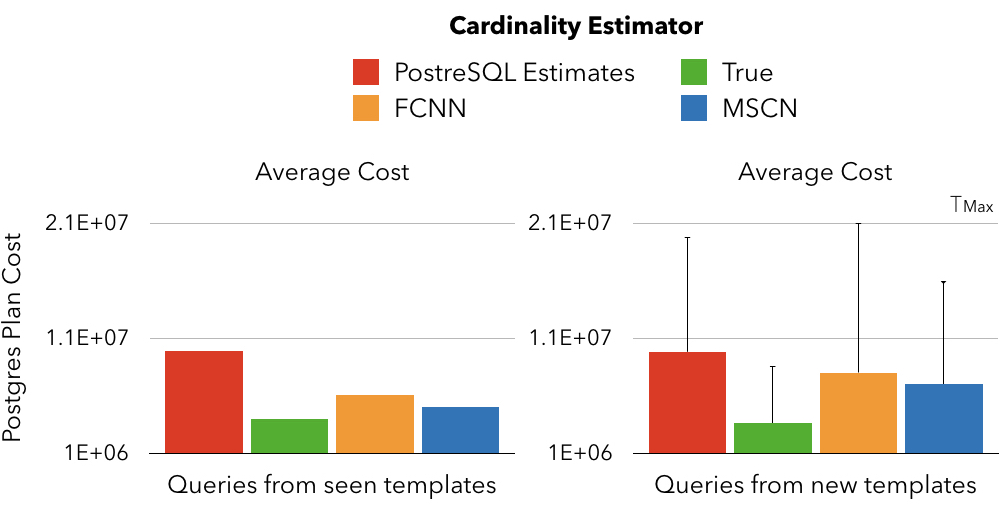 Computing runtimes is significantly expensive — and this experiment shows that we can often rely on trusting the Plan Cost evaluation metric instead, although the exact relationship between the runtimes and the plan costs should be an open research problem.

Why Is This Benchmark Needed?

The Join Order Benchmark (JOB) did a great job of highlighting why TPC-style synthetic benchmarks may not be enough for evaluating query optimizers, in particular, the impact of cardinality estimation. In the CEB repo, we also provide cardinality data for JOB, and other derived workloads, such as JOB-M, or JOB-light, so they can be as easily evaluated with the tools described so far. However, even though JOB illustrates query optimization challenges, it contains too few queries for a cardinality estimation benchmark suited to the deep learning-style models often used today. The table below shows key properties of CEB compared to JOB.3 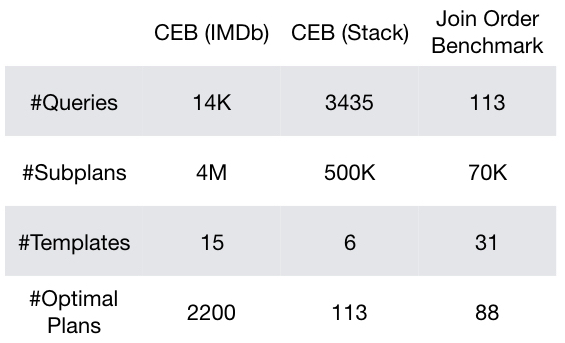 There are several reasons why a larger benchmark is useful. Two critical motivations for us were:

We would love to get your contributions to further developing CEB, or exploring research questions using it. Here are a few ideas:

We envision CEB to serve as a foundation for benchmarking (learned) cardinality estimators. We hope to add additional database backends besides PostgreSQL, and several other databases and query workloads, in order to build a much more challenging set of milestones for building robust and reliable ML models for cardinality estimation in a query optimizer. Please contribute!